The Theomins had many complex decisions to make when they decided to build on their Royal Terrace site. They were aware of what local architects could achieve, having visited the homes built for the small Jewish community in Dunedin. They were familiar with Salmond & Vanes who later designed the Princes St building where the Theomin’s musical instrument business was located. Whatever the reason, the opportunity to engage an overseas architect to design the house was made part of an extensive trip abroad in 1902. Along with many successful colonial businessmen, David Theomin spent a great deal of time out of the country. Dorothy was attending Rodean School in England and the family would meet and travel during the holidays. While visiting Canada, David Theomin obtained sketch plans for his house in Dunedin from Toronto architect Charles J. Gibson (1862–1935). Gibson ran a busy practice and built houses for prominent Toronto industrialists but Theomin rejected the plans and went on London where he visited Ernest George who was offered the commission for Olveston. The intriguing question is what might have Olveston become if Gibson’s plans had been used? Would it now be one of New Zealand’s finest historic buildings?

Gibson’s drawings show a fashionable two-storey house with large bays set at right angles to a semi-circular veranda that scaled the full height of the building. These were often finished with a conical roof giving a strong French flavor. A similar house named Venard was built in Mornington in 1898 and designed by J. L. Salmond so Theomin was well acquainted with the style. Red brick and contrasting stone facings would be set off by the complex veranda and a tall Marseilles tile roof.  It would have been a large and impressive house but perhaps not enough to satisfy Theomin’s desire to have something unique in the colony. While some New Zealand houses are described as the designs of English architects, few actually were. Olveston remains unique in New Zealand as the work of a prominent English architect regarded as a style leader in the decades before. This was recognised in the 1960s when the house and its contents were gifted to the city. 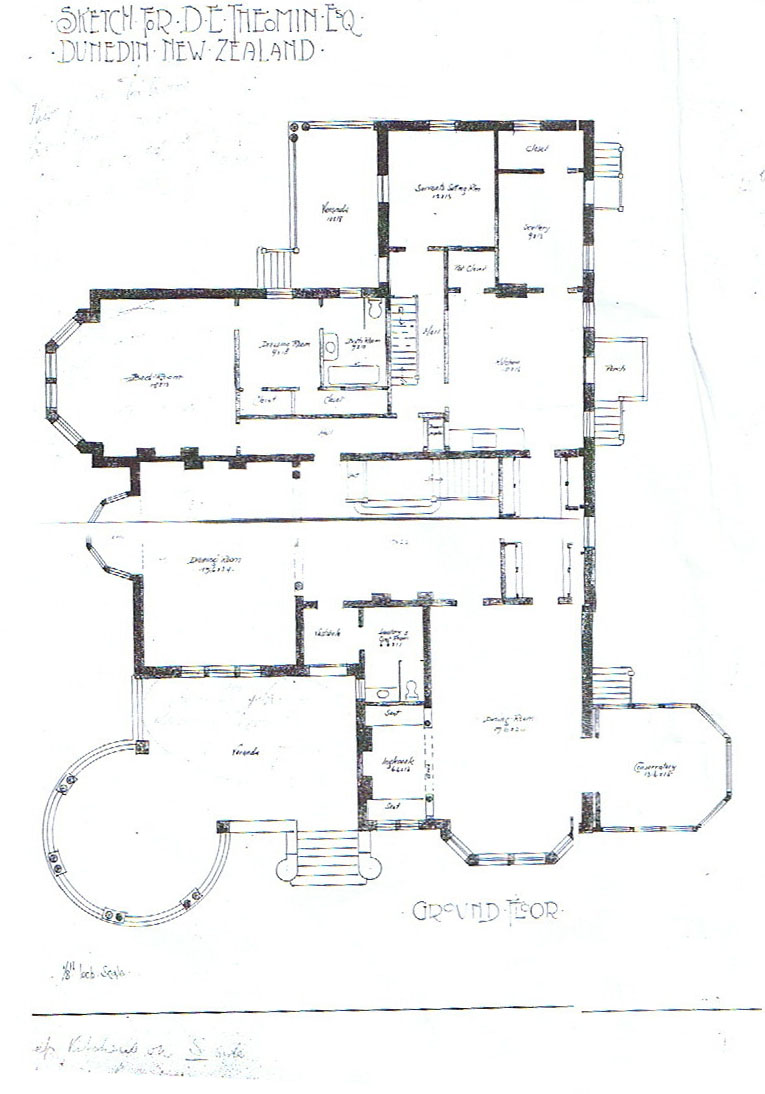