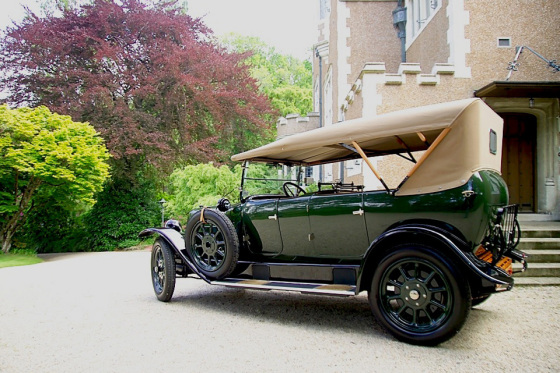 Mention Fiat and most would immediately think of Fiat’s cheerful 500 super-mini and not a gracious touring car from the 1920s.The Theomin’s Fiat 510 Tourer is a 1921 model with a four door open body and substantial canvas folding top and side screens. It was the largest car in the post-First World War Fiat range and was equipped with a six cylinder motor. Fitted with a light weight body as this one is, these powerful cars were capable of traveling sixty miles in the hour. There were few roads in and around Dunedin where this would have been advisable. Even so, the big Fiat would have made easy work of the city’s steep hills.

The choice of a large and fairly expensive product of Italy as a family car showed David Theomin’s interest in the finer things of life. The McIndoes, of printing and plastic surgery fame, enjoyed a Minerva from Belgium. Fine cars were imported from a number of European manufacturers before punishing import duties introduced in the 1930s restricted the range to products from the British Empire.