The parts of Olveston you do not see 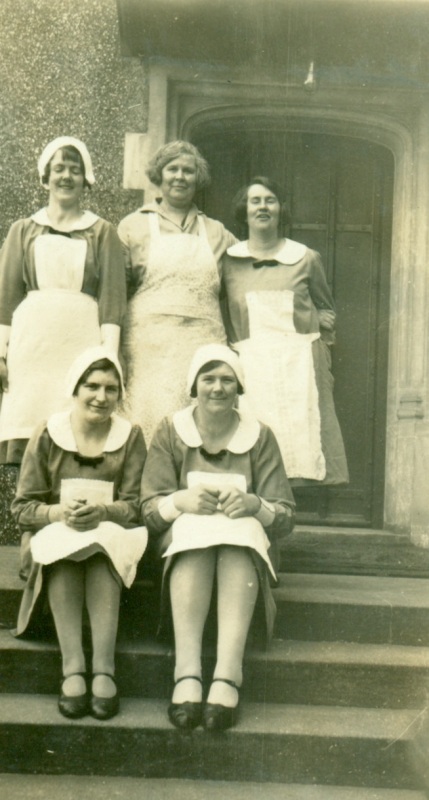 This undated photograph shows Miss E. Barr (centre back), a, cook for nine years in the 1930s. Housemaid Miss M Byrne is on her left. Seated on the left was Miss Ethel Massey (nee Wilson) who was also employed as a housemaid between 1930 and 1939. Does anyone recognise the other staff?

As the most distant part of the British empire, New Zealand inherited some testing social situations as well as creating new ones of its own through the unique situation of the colony. Attracting people prepared to work as domestic servants proved to be a consistent challenge through the nineteenth century. Newspapers were full of advertisements for servants, some of which were repeated in the same position in the column for years. The problem was less acute in the cities where staff could at least enjoy a social life that compensated for the long hours and hard work. Few employers could accommodate married couples so live in arrangements generally only lasted while staff were unattached.  At least one marriage between staff took place with David Theomin’s butler Louis Wahrlich marrying housemaid Hannah Parsons in 1909. While their employment at the house ended, Theomin provided work for Louis in his Dunedin businesses and the couple were employed as caretakers at the Synagogue in Moray Place.

The Theomins were aware of what they needed to do to retain their staff and providing a high standard of accommodation was part of the brief to their architect Ernest George. Olveston is a four-storey structure and the maids’ quarters were cleverly fitted under the roof, explaining how 35 rooms could be contained on a fairly modest footprint. Olveston’s chauffeur lived in a separate house adjacent to the property while the gardener had his own cottage on the grounds. Olveston was planned along the lines of a Renaissance merchant’s palazzo, updated for the social requirements of the day. In the late Victorian town house what had been called the ‘piano mobile’ or noble floor was split into two levels with the reception rooms on the ground floor and the family’s private accommodation on a level above. The servants’ stair can be seen in the right of the ground floor plan and extended the full height of the house. The uppermost floor contained four separate maid’s bedrooms although some had to double up in a room as up to eight house staff were employed at one time. The largest bedroom had a sitting room attached that enjoyed the sun and view across to the town belt while another bedroom was situated romantically at the top of the tower.

Victorian notions of privacy had made large house plans increasingly complex. Each generation, gender and occupation had their own suites of rooms so that encounters between owners, visitors and staff were tightly controlled. The servants stairs at Olveston linked the maid’s spaces with kitchens, corridors and workrooms so that their comings and goings were discretely veiled. The original maid’s quarters at Olveston were later converted into flats for staff who live in and assist with security at the house so these are the parts you do not see.