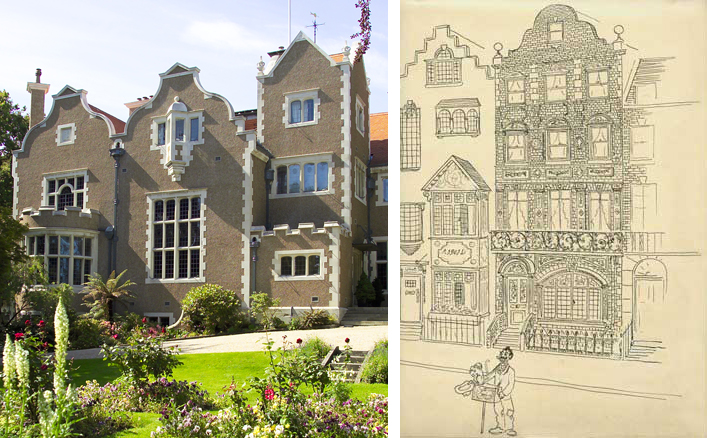 Olveston’s lively profile made up of differently shaped gables is a feature of Jacobean revival architecture | Osbert Lancaster gently parodied the Olveston style as ‘Pont St Dutch’ in Pillar to Post (1938).

Architectural taste at the end of the nineteenth century turned towards the first Elizabethan era, some 300 years before. There was a strong element of imperial pride in that particular point in British history. The nation had begun its long period of influence that reached a peak with London as the largest city in the world and the British Empire stretching across the globe to eventually reach New Zealand.

Elizabethan and Tudor revival buildings were a mark of Britain’s cultural and economic status and a reminder of the great period of seaborne exploration and trade. The Jacobean period followed in the early seventeenth-century and is named after King James I of Scotland who also ruled England after the unification of the two kingdoms. Jacobean architecture is mainly characterised by shapely gables borrowed from Italian and Flemish baroque styles. It was regarded as a ‘free’ style and not subject to the strict rules of classical architecture. Architects were free to blend its details with modern elements. Jacobean mixed with Queen Ann and Arts and Crafts was used in fashionable parts of London where the term ‘Pont Street Dutch’ was later coined by author Osbert Lancaster to characterise the tall red brick houses built in Knightsbridge for successful merchants. The Jacobean revival had all of the desirable attributes for the Theomins. It was British but with European overtones, fashionable without being faddish and distinctive but not over stated.